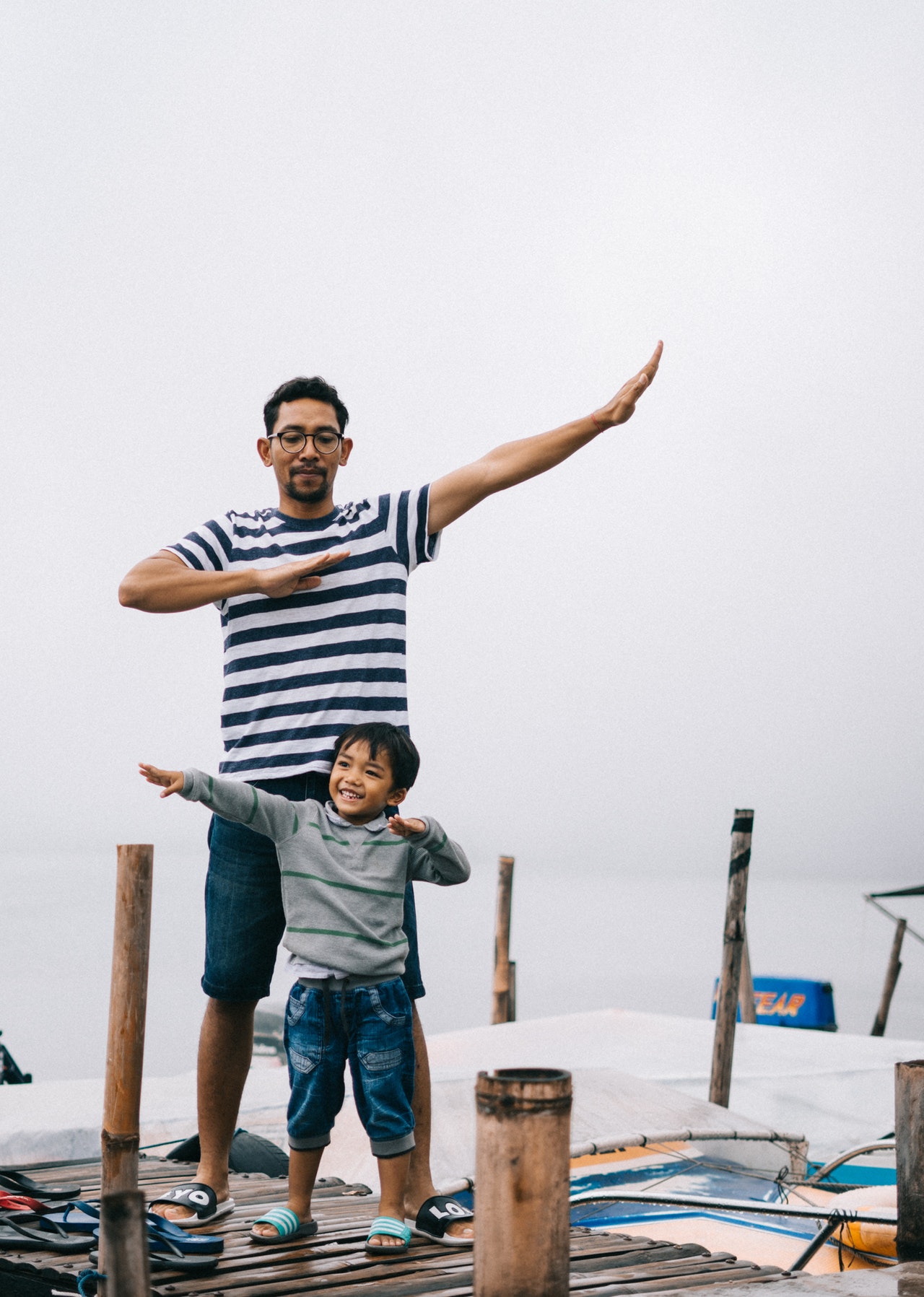 “Our Fathers, chained in prisons dark,

Were still in heart and conscience free:

How sweet would be their children’s fate,

Faith of our Fathers! Holy Faith!

We will be true to thee till death.”

Once in mass, I looked several pews ahead and saw the quintessential 21st century dad. Armed with weapons for every challenge, his burp rag hung out his back pocket and pacifier was in reach! Projectile vomiting has met its match!

In the 1960’s and 1970’s, women began entering the workforce in droves. This led child-rearing out of the homes and into franchised daycare, which became a booming industry. The professional woman who chose to stay home to raise her kids was ridiculed. For those not in daycare, a new label was created: latch-key kid, the child at home alone locked into their house waiting for mom to come home from work. (Over the years, many now-adult latchkey children have told me of their fear and loneliness in childhood). This was the first generation raised by MTV as parents had less time to supervise entertainment. Increasingly, dads were disappearing from the home altogether, for the first time in history the divorce rate soared over 50% and, with drugs mainstreamed into all income brackets and lifestyles, many dads were in jail. By the mid-1980’s, children’s books began to only depict families with moms, no dads. It was oft-written that children needed to have books and entertainment that depicted their ‘real life’.

By the 1990’s, kids were raised on Disney and Nickelodeon, programming designed to grow young ‘consumers’ into MTV and other adult programming. If entertainment included parents, these were minor characters who served to facilitate the child-stars or were the butt of their jokes. By this century, children’s books often no longer depicted any parents in their scenes. In half a century, we went from raising kids with Dick, Jane & Spot books depicting children in wholesome scenes that showed beauty, love, virtue and family  to books and entertainment depicting androgynous, autonomous characters without family.

“The presence of a father in the family offers something important and different than a mother to both sons and daughters. All of his children need his love and protection of course. But his sons in particular need him to model a manhood that is morally and psychologically healthy so they can eventually undertake their own adult roles: as workers, friends, and (for the majority of men through most of history) husbands and fathers.

His daughters, on the other hand, need him to impart a sense of safety and security. They also learn from his example of protective and respectful love toward their mother what kind of treatment they have a right to expect from men as they grow up. And they will thereby develop the confidence to steer clear of mistreatment or disrespect from men.” (Fr. C. John McCloskey) [i]

In spite of having raised two generations without consistent fatherly role models in the home, in recent years we have seen an increase in actively-parenting dads. And while role models may be nearly extinct, wise advice abounds as the movement rapidly picks up speed to restore fatherhood and the family within the Catholic church. Steve Wood [ii]  Sam Guzman [iii]and Patrick Madrid [iv]  all speak to the influence of the father as role model. To aid in that, Randy Hain gives an umbrella list that can actually be a good examen for each day:

Perhaps most pronounced of late was Bishop Thomas Olmsted’s groundbreaking book Into the Breach: An Apostolic Exhortation to Catholic Men. A compassionate guidance to men on manhood positioned within the context of their role as husband and father.

Let’s continue to pray for our spiritual fathers, our clergy and religious, and our worldwide church.

“Finally, I want to offer a special word for those men who know that they have failed in their fatherhood. This is true to a greater or lesser degree in each and every one of us. This can happen through addiction, abandonment, marital conflict, emotional and spiritual detachment, failing to guide the family in faith, abortion, physical and/or emotional abuse, or the countless ways that we obscure the image of God as the loving Father. I stand with you as an imperfect father, asking God the Father to make up for the ways that we fail in this greatest of masculine missions. It is important to acknowledge the enemy’s tactics; Satan will attempt to drag us down into a despair that can lead us to abandon our fatherhood even further because of our sins. Yet we must never give up, my sons! Pray and be renewed in the Sacrament of Reconciliation. Christ strengthens us through Confession and the Holy Eucharist to spend ourselves in rebuilding fatherhood in whatever way possible.” (Bishop Thomas Olmsted, Into the Breach)