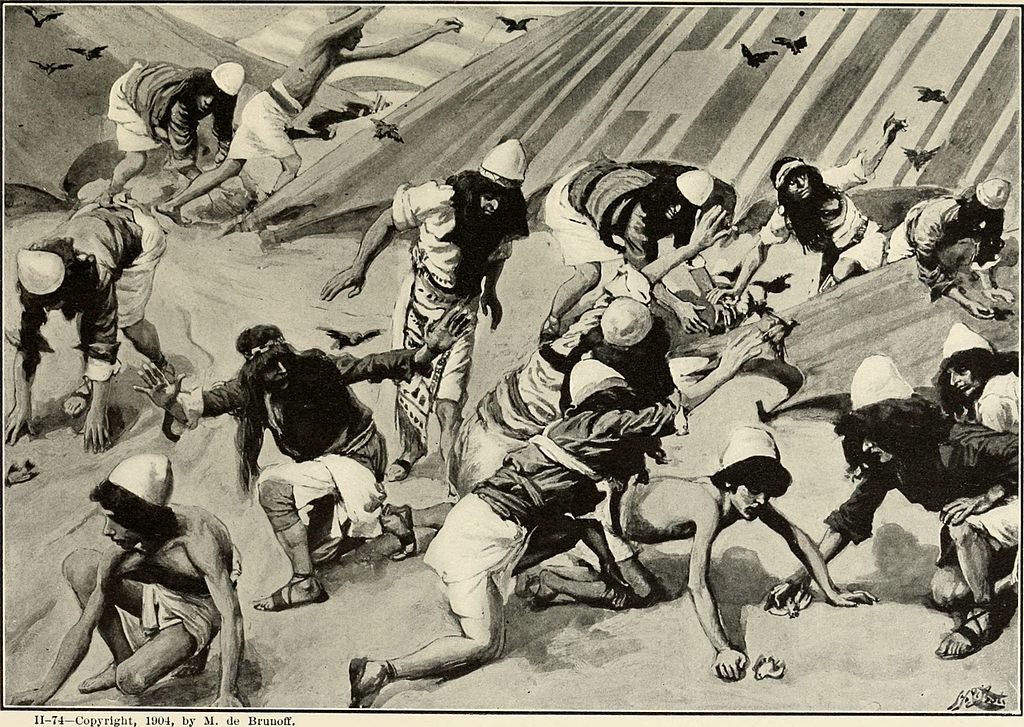 From the book of Numbers:

Death of Miriam. The Israelites, the whole community, arrived in the wilderness of Zin in the first month, and the people stayed at Kadesh. It was here that Miriam died, and here that she was buried.

Need for Water at Kadesh. Since the community had no water, they held an assembly against Moses and Aaron. The people quarreled with Moses, exclaiming, “Would that we had perished when our kindred perished before the Lord! Why have you brought the Lord’s assembly into this wilderness for us and our livestock to die here? Why have you brought us up out of Egypt, only to bring us to this wretched place? It is not a place for grain nor figs nor vines nor pomegranates! And there is no water to drink!” But Moses and Aaron went away from the assembly to the entrance of the tent of meeting, where they fell prostrate.

Sin of Moses and Aaron. Then the glory of the Lord appeared to them, and the Lord said to Moses: Take the staff and assemble the community, you and Aaron your brother, and in their presence command the rock to yield its waters. Thereby you will bring forth water from the rock for them, and supply the community and their livestock with water. So Moses took the staff from its place before the Lord, as he was ordered. Then Moses and Aaron gathered the assembly in front of the rock, where he said to them, “Just listen, you rebels! Are we to produce water for you out of this rock?” Then, raising his hand, Moses struck the rock twice with his staff, and water came out in abundance, and the community and their livestock drank. But the Lord said to Moses and Aaron: Because you did not have confidence in me, to acknowledge my holiness before the Israelites, therefore you shall not lead this assembly into the land I have given them.

These are the waters of Meribah, where the Israelites quarreled with the Lord, and through which he displayed his holiness. (Numbers 20:1-13)

In the book of Numbers, we follow the grumbling of the people. Their concerns were legitimate. Their attitude was not. They complain about their current circumstances rather than reflecting on why God has permitted it. What virtues might they need to grow in so as to live with a peaceful heart in all situations? Compassion for one another. Love for those they don’t even like to be around. The self-control to use from creation and supplies only that which they truly need, and to share surplus with those who have greater need.

Trying times are always permitted as opportunity for growth in virtue. These virtues are naturally designed into our human nature so that we are capable of living out God’s covenant, which always brings some harmony back to the cosmos when lived authentically.

Yet ultimately these natural virtues are intended to dispose us for God’s supernatural grace. As St. Thomas Aquinas puts it, for the baptized soul “God works in us without us”.  The Holy Spirit has infused into our soul His grace that imparts a supernatural quality to our natural virtues. It makes our efforts to perform in ways beyond our own strengths and personality. Through these, we are disposed to the highest virtues of faith, hope and charity. Hoarding, judgmental thinking, snide remarks and comebacks, cynicism, lashing out with verbal attacks… our former defaults that come out of our brokenness begin to disappear. Similarly, fear to speak up when needed, going along with the crowd mentality, soothing fears with emotionally-consoling speakers regardless of the error they teach and their manipulative ways…the virtuous person can no longer live this way. Fear drives them to God, not social media icons, desiring His help in their response. Anger is no longer a disordered emotion. It becomes the fuel to surrender to God who provides the steadfastness of spirit and language of wisdom to deal with the situation. Steadfastness and righteous anger are not emotions in the belly; they become experiences of the Holy Spirit in the heart. The one to whom God has granted such virtue knows this distinction intimately. Proper daily examen and mental prayer leads them to root out those times they acted out of emotion rather than ordering it toward wisdom. This is the manner God has given us to grow in virtue so that His Light of Glory grows within us and glows to others.

Elsewhere in scripture, we see that Moses indeed had this Glory light within. His face glowed of light, he was the meekest of the Israelites (Numbers 12:3, 7-8; Exodus 34 & 35). Yet until our dying breath, we always must work to not fall out of grace. So it was for Moses whose irritation with the grumbling people is seen: “Just listen, you rebels!”.  The people had held an assembly against him, they argued with him. As in the past, Moses began correctly by approaching God in prostrated surrender to find His Divine will. However, in the past Moses proclaims verbatim that which God speaks to Him and always directs the people to understand both their offence against God and that any gifts are coming from God.

This time was different. Anytime people object to that which is truly good and holy in our own actions, they are objecting to God Himself. Moses, however, made it personal: “Are we to produce water for you…”. In anger, he named himself as the source of the gifts to come. He spoke from his disordered emotions, not with the language of wisdom inspired by God’s spirit. This, in spite of God earlier making known to the people that it was His Spirit in Moses (Numbers 11:16-17). He was not disposed to trust God and so struck the rock twice; thereafter, God specified Moses’ lack of confidence as his sin (v. 12). Nevertheless, God imparted His actual grace to ensure the work was done even when His will was not done (by Moses). 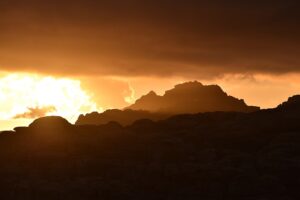 Sunset behind Tomb of Aaron, a view from Wadi Musa village by Qais Tweissi via Wikimedia

Too often we do God’s work in a manner that isn’t His will. Because (thanks to God alone) the fruits of our efforts may be good, we mistakenly think the disordered passions and unvirtuous manner in which it was accomplished is then justified. We actually grow in vice and are disposed to sin in spite of the good work done for God. By example, we lead others astray with false notion of virtue.

In these trying times, the best thing we can do for our families, church and country is to allow ourselves to be reformed by Jesus. Take up new efforts for the examen and mental prayer; daily mass; spiritual reading of the teachings of saints; regular confession distilling from all of these. Pray for love of others and then pray for others, especially our Pope, clergy, religious and Holy Mother Church. This is the recipe for confidence in God; anxiety and depression will melt away.

Lord, teach me to be generous.

Teach me to serve you as you deserve;

to give and not to count the cost,

to fight and not to heed the wounds,

to toil and not to seek for rest,

to labor and not to ask for reward,

save that of knowing that I do your will. (St. Ignatius of Loyola)

Cover image: Grumbling Israelites in The Bible and its story from Wikimedia