BOOK REVIEW: The Devil’s in the Castle by Dan Burke 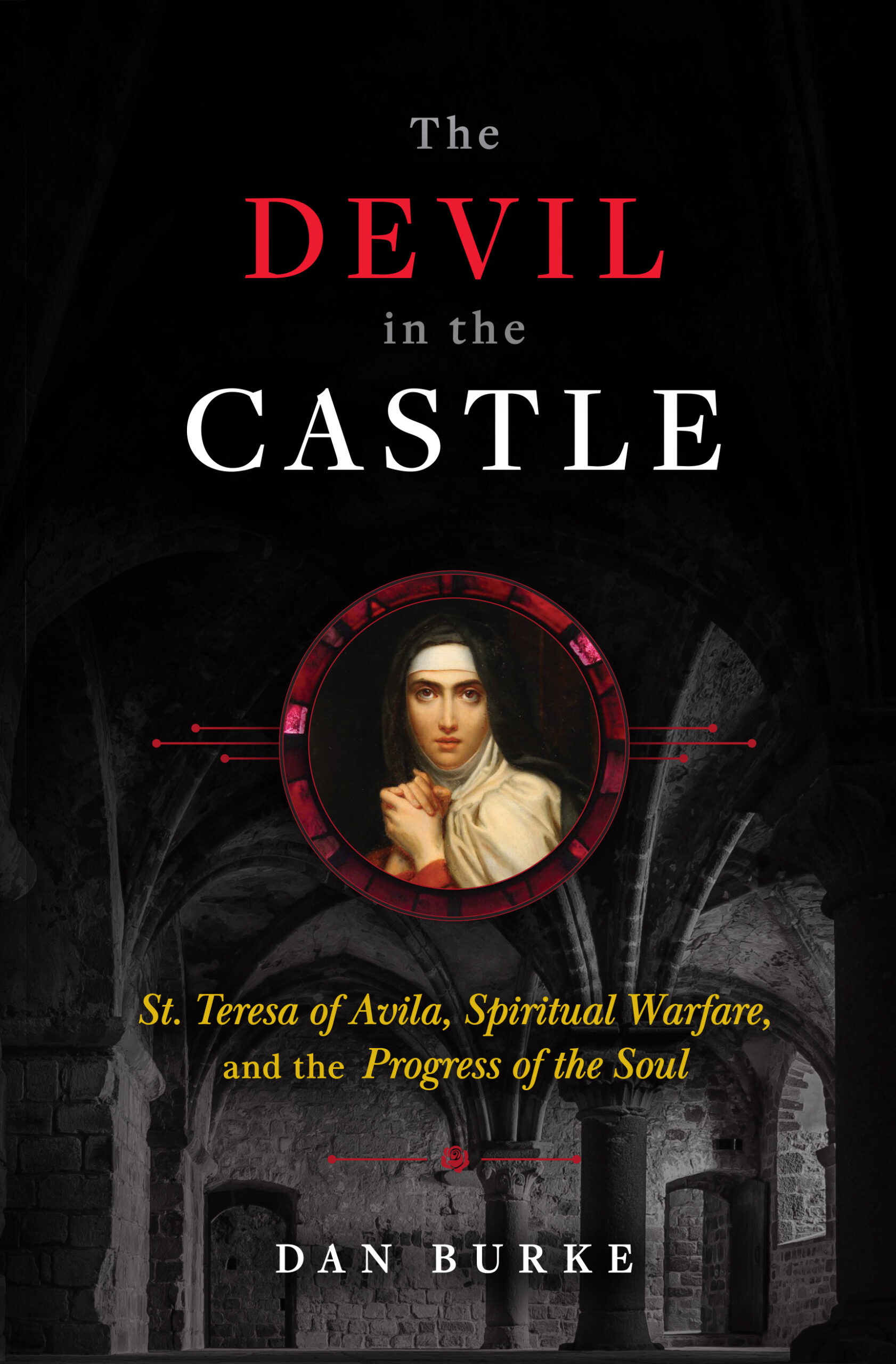 Book review: The Devil’s in the Castle by Dan Burke

The Devil’s in the Castle guides us through St. Teresa of Avila’s classic spiritual writing, Interior Castle. For those not familiar with her writings or this specific book, it is a collection of advisements to her nuns on the spiritual life. She attempts to explain the transformation a person undergoes as they grow in their relationship with God. Writing in the 16th century, she likens this growth to a series of seven mansions (rooms) within a castle. If the reader is informed and understanding of the experiences of spiritual growth, they will be better able to cooperate with God and make great advances towards sanctity.

Dan Burke’s undertaking is to extract the key points of wisdom from Teresa’s writings and explain them in a manner that the reader can better understand. The devil’s main purpose in all that he does is to break our relationship with God. Thus, as we grow in that relationship, he uses a variety of tactics to impede and even tempt us away from that growth. Burke presents an accessible, well-organized manual packed with counsel and practical advice.

Most books on prayer and the spiritual life quote the same passages of Teresa’s writing with little variation. It is refreshing, then, that Burke has used a variety of sources to provide peeks into her guidance. Rather than a linear recitations of Teresa’s writings, he presents reflection and summary with prompts to the source for the reader to take in directly. Chapters are of a reasonable length, and the discussion is organized for quick understanding. After initial explanations, he gives a summary of the demonic battles in that mansion and tactics to fight them, followed by spiritual encouragement and reflection questions for prayer.

The enemy’s techniques vary in accord to the soul’s spiritual growth. He uses tactics and disguises to lure us to the partial good or make the lesser good choice. Burke explains “He will make every effort to waylay you to get you to pause, to walk another (easier) path, to give up, or to believe that what is good is actually bad, or vice versa” (p. 7-8).

In the first mansion, Burke begins by providing an image of castle grounds within city walls. He then uses the sacraments to explain entrance into this castle. The devil’s tactics to thwart entrance are put in terms of everyday experience: “But the demon’s goal is to keep the soul in a kind of vague, superficial, ineffectual, pseudo-relationship to God—one that doesn’t compel it too much more than be nice to others and think well of itself” (p.12). [On an aside: a humanist in Christian clothing, readers may find the Holy Spirit convicts them!]

In the second mansion, the soul is practicing mental prayer. Shame and self-pity can sidetrack progress. However, the soul’s ‘eyes’ have opened to see God, itself and the path. Burke does well to lead us to understand how the soul grows in desire only for things of God and begins to give up things that appease its “lower nature”, things of the world. From this, we can see how the soul moves from leaving its door wide open for the enemy to enter (first mansion) whereas in the second mansion the devil must now enter through ‘cracks in character, or holes in virtue, sinful behavior, and past wounds and traumas” (p. 29).

An added benefit for the reader is Burke’s knowledge of St. Ignatius’ spiritual exercises and discernment of spirits. This flavors the recommendations for battling the tactics of the enemy. For example, if you are tempted to take care of some important matter instead of entering into your mental prayer, Burke recommends “go to prayer and stay in prayer no less than the time you had committed to, and maybe a bit more” (p.32). The 13th annotation of Ignatius’ exercises also advises this adding the encouragement that in doing so you “will accustom himself not only to resist the enemy, but even to overthrow him”.

The third mansion is an important stage. Positioning the reader with a proper understanding of fear of the Lord (awe of God and subsequent fear of sin), the “Life of an authentic disciple is a life of both deep peace and joy and epic and exhausting battles” (p. 40). It is important to understand as here Teresa begins to warn about the ease of sliding back into mortal sin. It is in this mansion that the effects of conquering mortal sin and rooting out venial sin begin to show in the person’s prayer life and lifestyle choices.

It is also here where Burke gives one of his first extended explanations of the spiritual life. He has overlaid teachings from spiritual masters such as The Soul of the Apostolate (Jean-Baptiste Chautard) into stages and charts that help us to understand this is a process of transitions. Explaining aridity in prayer caused by transitioning from the sensory prayer experiences of the purgative stage to the more interior experiences of the illuminative stage addresses one of the most common roadblocks in the prayer life. The necessity of this cannot be understated for if the person knows these teachings, they will be less confused and more apt to respond to God as they grow in this relationship with Him.

Entering into the fourth mansion, the soul has lost much of its baggage of attachments. However, that also includes living such a God-centered life that the loneliness of the path becomes apparent. The person seeks out other ‘seekers’ and holy relationships. Here is where the enemy presents illusions of good things that appear to be of God but are not. In particular, he will mimic God in prayer. It is a shift from temptation to frustrating prayer and drawing you to near occasions of sin. God permits this to better attunes the soul to know God and itself more intimately.

Now in the fifth mansion, the soul is far progressed in the illuminate way, a phase Burke terms “relative perfection” borrowed from Chautard’s work. The devil poses as an angel of light in his attempts to closely mimic God. This is when a person is faced with multiple good choices to make and must discern the better-good choice. Examples are also given of how the devil can create a false sense of peace, disputing the common—but very incorrect—belief amongst Catholics that if they are at peace then they are doing God’s will.

Entering the sixth mansion is transitioning into the unitive way. Having given up most attachments, the soul is being formed into heroic perfection. St. Teresa provides lengthy explanations as to the subtle cunning ways of the devil, who in this stage cannot inhibit the faculties of the soul.

Now the last mansion. This seventh mansion, the unitive stage of growth, is reflected by complete perfection. More complexly than in the previous mansions, the soul is in a tranquility initiated by God; the faculties of the soul and bodily senses are not involved. Although the soul experiences little harassment from the enemy, it must remain disciplined lest its senses, passions and “flesh” rise up against it.

Help for the journey

Having completed his review of Teresa’s mansions, Burke gives the additional gift of a bit of spiritual guidance with his own model, the Paradigm of Ascent™. It is a compilation of the teachings of saints and holy authors on man’s ascent to God. It’s truths are as follows:

He refers to this model as a “saint-making machine”. The self-giving and self-denial includes an Ignatian examen which differs from the standard examination of conscience. In the examination of conscience, we look for our sins; thus, the focus is on ourselves. In contrast, the Ignatian examen is a conversation with God reviewing your day, asking God to illuminate how you responded to His grace.

Finally, Burke provides extensive resources for spiritual growth. To live out the Paradigm  model, he provides many books that align to the stages of growth and will help the reader engage those necessary conversations with God. It is followed  by a daily examen guide and a confession guide. The latter gives extensive suggestions of common relational behaviors and disordered passions that should help the reader go well beyond the rote “I yelled at my kids 10 times”. 😊

I highly recommend this book for a number of reasons. If a reader is unfamiliar with the spiritual teachings of the church regarding prayer and the spiritual life, I think they will understand Dan’s interpretation of Teresa’s teachings for the first three mansions of the castle. These capture what we ‘know’ we should be doing but too often are not or are doing poorly. As one pursues the moral life and prayer, the book can be reviewed again and again to guide along the path.

For all readers, his explanations of behaviors are easily recognized in one’s life. One could read a Mansion per week, taking it daily into 20 minutes of silent prayer asking God to open your eyes to your own behaviors and experiences, the good and the bad of it. It of course is a perfect accompaniment to reading Teresa’s Interior Castle but can be used stand-alone in this manner too. Finally, it would be advantageous as a small group study for those being formed in prayer.

(No renumeration was received for this review, and no affiliate fees are earned by me from book purchases.)