Getting right with God 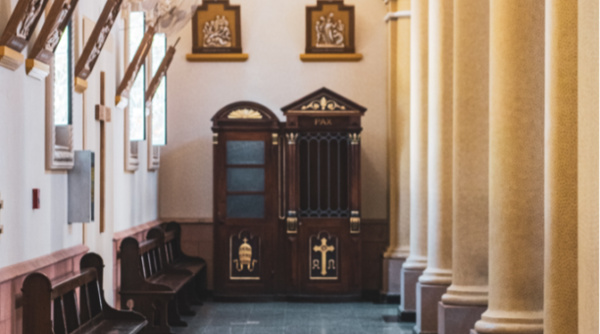 Photo by Mateus Campos-Felipe from Unsplash

In the old days, we called going to confession ‘getting right with God’. Regardless of what was happening in life, something deep inside of us knew that our relationship with God was the one thing that needed to be order. I liken it to having an internal antenna seeking God. The Church teaches that the very fabric of our being is created for this right orientation to God.

These turbulent times leave us quite disoriented but as Catholics we are blessed to have God as our center of gravity, grounding us from within the very heart of our soul. Living out our day in awareness of His presence is our desire, yet a difficult task for sure! When this relationship is the purpose to making confession, God gives the grace for remorse and a person can literally feel the relief from burdens plaguing the heart.

The extent to which healing takes place in confession is in proportion to the honesty with which one has prepared beforehand with God. A father can confess to losing his temper, having yelled at his son numerous times. Meanwhile, another father might first spend silent time in prayer, talking with God about why he loses his temper, understanding the triggers and his default reactions. Then, in confession, he can confess the fuller nature of the sin: his fear for his son making poor choices and harming himself, and a need to trust more fully in God.

In these examples, both fathers receive absolution of their sins, but the second father is now on the path to healing his own woundedness. This will help him to prevent losing his temper in the future. It will also lead to further honest conversations with God and being filled with that peace that all souls seek.

“It is a defined article of the Catholic faith that the demons now in hell were originally in God’s friendship. By the abuse of their free will, they condemn themselves to eternal punishment. We, too, have free will. In strict justice, we could now be where the fallen angels are except for the mercy of God.” (Servant of God Fr. John Hardon SJ) [i]

To know sin, we must first know love. It is important to prepare for confession (and each time of prayer) asking God to show you your sin so that you can know how deeply He loves you. In spite of your worst offenses, He never abandoned you even in those times when you abandoned Him. He never stopped loving you.

The first take-away then is to learn the permanency of real love. His.

The second take-away is to know the impact of sinful ways upon you, your relationship with God and subsequently others in your life. Heartened by the permanency of His love, ask for the desire to change so that you may live in that love. After all, what He wants for you is true happiness.

“Self-love is cunning: It pushes and insinuates itself into everything, while making us believe it is not there at all.”  (St. Francis de Sales)

It isn’t God who gets in our way of being happy; we get in the way of God trying to bring us this happiness. St. Ignatius of Loyola teaches us of the attitude or disposition a person takes towards God, which he calls the Three Classes of Men (Sp. Ex. 149-155). St. Bonaventure and other saints have similar explanations in which they distinguish the disposition of the heart by classifying common attitudes. (Keep in mind that when the saints refer to ‘man/men’, they are referring to all of mankind, men and women alike; all human persons.). The first class or lowest is the person who simply wants to avoid hell so as to avoid their own suffering. These self-centered motives may reflect knowledge of the Faith but lack Faith itself. Faith is more than a belief that the unseen God exists (after all, even atheists and Satanists believe that). It is belief with a desire for Him (Heb 11:1). St. Robert Bellarmine refers to ‘wicked Catholics’ as those receiving the sacraments with a lack of love in their motives. Without love to open the door of the soul, the grace of the sacraments falls away like a raindrop bouncing off a hard stone. Their Salvation is nebulous even though ‘practicing’ the Faith.

The second class of persons possess Faith with some desire for the unseen God. However, their attachments remain more important and so they attempt to conform God to their life rather than conforming their life to God.

“The man who has God in his heart carries paradise within him.” (St. Ignatius of Loyola)

The third class of men wants to rid themselves of attachments in order to do God’s will and to be better able to serve Him. This is the beginning of the path to Divine Intimacy and lifelong happiness. It is the path He has already laid out for each of us personally. In these turbulent times, we must answer God’s call to holiness and allow Him to transform us into this third class of men and women. Thanks to God for the sacrament of reconciliation!

Remaining active in this communion of saints through intercessory prayer is also important. We must continue to pray for Pope Francis, our Holy Mother Church worldwide, and our country.

“The priestly vocation is essentially a call to sanctity, in the form that derives from the Sacrament of Holy Orders.  Sanctity is intimacy with God; it is the imitation of Christ, poor, chaste and humble; it is unreserved love for souls and self-giving to their true good; it is love for the church which is holy and wants us to be holy, because such is the mission that Christ has entrusted to it.  Each one of you must be holy also in order to help your brothers pursue their vocation to sanctity.” (St. John Paul II)

Adapted from The Life Confession: A Discovery of God’s Mercy and Love. Available in Kindle and paperback:

Consecrated to the Sacred Heart of Jesus through the Immaculate Heart of Mary. Except where noted, all design, writing and images ©2020 by Debra Black and TheFaceofGraceProject.com. All Rights Reserved. No part of this website may be reproduced, distributed or transmitted in any form or by any means, including downloading, photocopying, recording, or other electronic or mechanical methods, without the prior written permission of the publisher, except in the case of brief quotations embodied in critical reviews and certain other noncommercial uses permitted by copyright law. For permission or to report violations please email:   thefaceofgraceproject@gmail.com