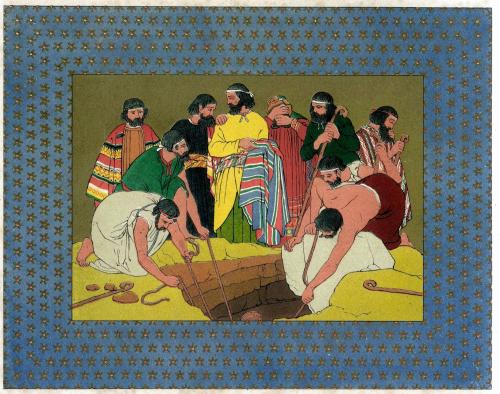 Lent now comes to a close, and we prepare to embrace the Truth of our salvation, our redemption, as foretold to us in the Old Testament scriptures and fulfilled in Jesus Christ. How distant those ‘tales’ may seem to our current life, and yet some things never change.

Looking, for example, at Joseph’s saga, the human dynamics of family strife are akin to a reality TV show.  Coming from a blended family and not counting his mistresses (concubines), his dad Jacob (Israel) has 2 wives (with 2 sets of kids) but liked Rachel better than Leah. In fact, Jacob didn’t even want Leah; he was tricked into marrying her. (Gen 29) Maybe that set of kids felt it too, given Reuben (the oldest) was never embraced by the father like a first-born son should in his time. The attitude of his mom’s jealousy is in the dynamic too (Gen 30:15). It is the favored wife Rachel who has the favored son Joseph, and he is spoiled. He’s given the finest robes (that should have gone to Reuben as first-born) which makes a visual, overt statement that he is superior to the others, particularly Reuben who ‘should’ have this treatment instead (Gen 37). Joseph gets to hang out in the house rather than labor in the fields with his brothers (Gen 37:12)—that had to grind. It is one thing to feel unloved by your parent, and quite another thing to feel least loved. The dreams of his family being under his rule might have been the last straw. Tearing up that fancy robe and then smearing it with goat’s blood to falsify ‘evidence’ of Joseph’s death must have had a twisted dark delight to it.

The family dynamics are universal and timeless: unmet expectations lead to bitterness, hurt and jealousy. Acting out of the pain, poor choices begin such as Reuben sleeping with his father’s concubine. Seemingly no big deal as certainly he wasn’t the only guy to be having illicit sex or they wouldn’t have had law as against it. But common sin leads to more severe sin as they carry out the plot for Joseph’s murder. The sin doesn’t relieve the pain nor heal the wound.

Now most families today might not have such extreme antics in their family dynamics. Or perhaps they do. In the absence of promiscuity, many have pornography, sexually-explicit entertainment, envy of another person’s relationship, lust in the heart. Meanwhile, people dump each other on Snapchat or Facebook. And while we might not have cisterns into which people are tossed to die, how easily we toss them away in our hearts and become ‘dead’ to them.

Imagine God from above looking down on Israel’s clan and seeing all these antics going on. He already had a plan for their redemption: Joseph survives, becomes a favorite of Pharaoh, and the residual social status enables him to actually save the entire people of Israel. Who would have ‘thunk it’? Just as promised in God’s covenant with Abraham (Gen 15) and renewed with Jacob (Gen 35: 9-12), the chosen people are saved even though they will continue to survive one nasty family dynamic after another until the covenant is perfected when God Himself comes to dwell among us: Jesus Christ is born.

“For suffering cannot be transformed and changed by a grace from outside, but from within. And Christ through his own salvific suffering is very much present in every human suffering and can act from within that suffering by the powers of His Spirit of truth, his consoling Spirit. “(St. John Paul II)[i]

Looking at the state of our own family dynamic today, it may be difficult to remember (or even believe) that God can and will redeem them. It is the trick of the enemy to place in our mind the universal negative that our spouse, parents, child or sibling will always be that way. Nothing will change (we think) and so take action into our own hands. Clearly that’s Reuben’s thinking, not God’s. As we join our family and friends to celebrate Easter this weekend and experience the dynamics that come out of the ‘baggage’ we each bring into it, remember God has already planned for your redemption and theirs too. And don’t underestimate the power of Hope itself to change that dynamic. 😊

We continue to pray for Pope Francis, all of our clergy and religious, and our worldwide church:

Mother of our Redeemer, in this era dedicated to you, with great joy we call you blessed. … To you, our Mother, we entrust in a special way our Bishop and the priests of our diocese. To them has been given a special sharing in the priesthood of Your Divine Son. He has chosen them to be ministers of His Word and Sacraments. Ask Him to fill them with zeal, to keep them faithful and joyful in His service, conscious of the fact that they care and so bring glory to the Father and honor to the Church. … Sustain all of us, O Virgin Mary, on our journey of faith and obtain for us the grace of eternal salvation. Amen

Have a blessed Easter!  😊