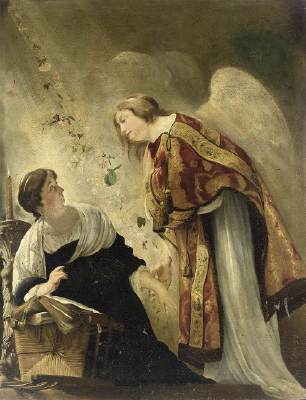 Photo: The Annunciation-Paulus Bor from Web Gallery of Art

For neither is that city, the heavenly Jerusalem, watered by the channel of any earthly river, but that Holy Spirit, proceeding from the Fount of Life, by a short draught of Whom we are satiated, seems to flow more abundantly among those celestial Thrones, Dominions and Powers, Angels and Archangels, rushing in the full course of the seven virtues of the Spirit. For if a river rising above its banks overflows, how much more does the Spirit, rising above every creature, when He touches the as it were low-lying fields of our minds, make glad that heavenly nature of the creatures with the larger fertility of His sanctification. (St. Ambrose of Milan)

September 29 is the feast of the Archangels Sts. Michael, Gabriel and Rafael. Then October 2 is the feast of our Guardian Angels. With permission of CatholicCulture.org, I thought I’d share again a fascinating saint for whom the angels were a part of her everyday life: St. Frances of Rome (1384-1440) patron of motorists and widows. She too lived in a time when the Church was in disarray:

“Born into nobility, St. Frances of Rome married Lorenzo Ponziano and together they had three children: John Baptist, Evangelist, and Agnes. A model wife, St. Frances balanced her prayer life with her duties at home. She taught that the married woman must often “leave God at the altar to find Him in her housekeeping”. Frances lived during the Great Schism; when Ladislaus of Naples invaded Rome in support of the Antipope, the Ponziano family suffered greatly for supporting the legitimate Pope. Evangelist died of a pestilence, and a year later he appeared to his mother with an Archangel warning her of Agnes’ approaching death. Frances was consoled by the Archangel, who remained with her, though visible only to her. She ministered to the poor and begged alms for them. She converted part of her family’s home into a hospital, and she eventually received the gift of healing. She founded the Oblates of Mary for a group of women. The made no vows but simply pledged to serve God and the poor; when Lorenzo died, Frances joined them. “

Although she wanted to be a nun as a young girl, she married at age 12 and lived out her vocation through her relationship with God with prayer. She watched 2 of her 3 children die and had to live with the prophetic knowledge of her daughter’s impending death. Just as we are called to do, she remained obedient to the magisterium in spite of great tribulation in the church and world.  Without her faith, she might have become a bitter woman lashing out about the Pope and in continual need of shopping therapy.  Instead, she joyfully set up a hospital in her home and purposefully sought out the most sickly people of Rome.

“During the three periods of her life, three angels of different rank accompanied her, ready to protect her soul against any onslaught of hell and to lead her step by step to spiritual perfection.” Catholicculture.org)

“One of the greatest mystics of the 15th century…With her husband’s consent Frances practiced continency, and advanced in a life of contemplation. Her visions often assumed the form of drama enacted for her by heavenly personages. She had the gift of miracles and ecstasy, as well as the bodily vision of her guardian angel, had revelations concerning purgatory and hell, and foretold the ending of the Western Schism. She could read the secrets of consciences and detect plots of diabolical origin.”

So her life really changed when she began mental prayer. Hmmm. Imagine how our world would change if we spent time in silence with God too?

“Teach the children that they are never alone, that an angel is at their side. Show them how to have a trusting conversation with the angel, who is a good advisor and intercedes for you and helps you in your needs.” (St. John XXIII)

Don’t forget…Servant of God John Hardon SJ taught that we have a duty to pray to our Guardian Angel because God created him as part of our providential plan.

“As the family assembles night after night to honour the loving Heart of the Word made flesh, the Guardian Angels of that Christian home will hover over its members, and record in the Book of Life each successive act of honour, of love, and of reparation as it speeds heavenwards to reach the throne of the glorified Heart of Jesus.” (Rev. M. D. Forrest, M.S.C.)

Let’s continue to pray for Pope Francis, all of our clergy and religious, and our American church. May the angels LIGHT, guard, RULE and guide us. May we be receptive to the Gifts of the Holy Spirit, particularly understanding, wisdom and counsel, so that we lovingly live out our true identity which is unabashedly Catholic. May all the powers of Heaven reign down among us, protecting us as well as all those who carry forth God’s truth in their public work or ministry.

I bind to myself today the power in the love of the Seraphim, in the obedience of the Angels, in the ministration of the Archangels, in the hope of Resurrection unto reward, in the prayers of the Patriarchs, in the predictions of the Prophets, in the preaching of the Apostles, in the faith of the Confessors, in the purity of the holy Virgins, in the deeds of Righteous men.  (St. Patrick of Ireland)