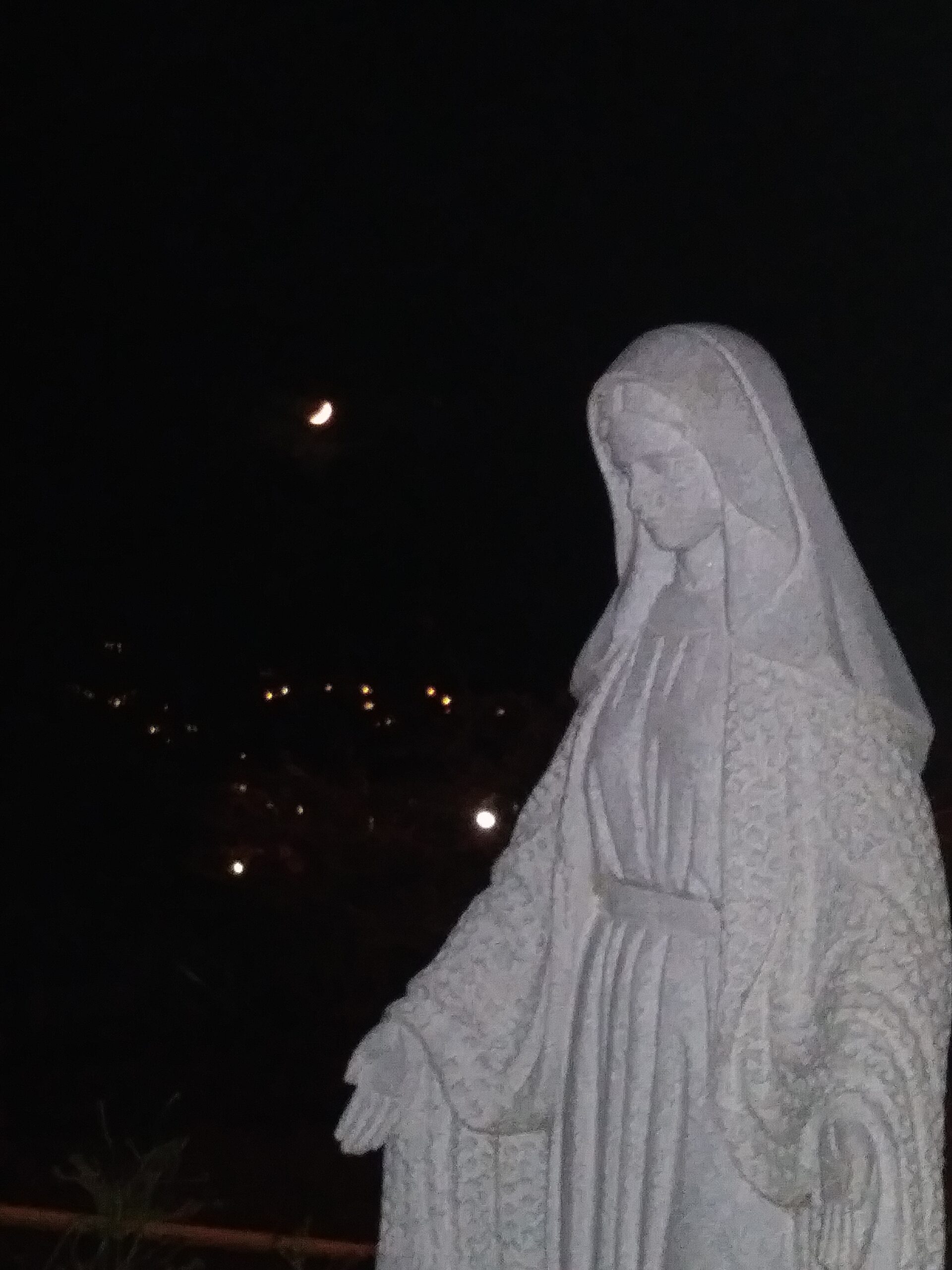 It was a cold November night as I sat in Mary’s garden outside of our church, praying a rosary for a friend whose funeral was the next day. Had we not been in pandemic lockdown, the church would be overflowing with people praying a rosary for him. Sitting outside in Jesus shadow, with Mary’s accompaniment, a young man in his 20’s came by and politely asked if he could interrupt my prayer. I was unable to determine if he was homeless or merely in a difficult state.  It turned out that he was attracted to our beautiful stained glass window of Jesus that lights up the night and decided to look at the statue in the garden. He became curious as to who the woman was standing on a serpent. After a nice long talk, this son of a non-practicing Catholic mother was going to find out if he was ever baptised.

God has designed life full of these poetic moments. Just as one of his sons is brought to his eternal rest, another son follows the Holy Spirit’s trail of grace and finds the path.

We wind down the month of November during which special attention has been given to those holy souls in Purgatory and the perfected saints in Heaven. With an acute sense of this true reality of the Christian life, we move into Advent preparing for the Author of life to come to us. Something is different, and it isn’t just the weirdness of living in a worldwide pandemic. This Advent, let’s also come to know this woman standing on the serpent and her Son.

Just before a cloudburst, a hush falls upon the earth below. There is a stillness as nature senses the impending change. Something is different.

Then it begins. The trees murmur to the first heavy drops of rain that fall…what do they say?

The whole world was in a state of anticipation for the Messiah. Whether of the Orient or of Israel, all of creation lay in wait of the Ancient One. Ann and Simeon were in the temple awaiting the Christ. Other humble souls prayed in private. All were burdened by the weight of the enemy and the struggles of life.  Then, something was different.

The Annunciation of Gabriel to Mary

The angel Gabriel was quite busy. Having brought the grace of fertility to an old couple, six months later he brings a new kind of grace to a young teen girl. But not just any girl. One who had been dedicated to the Temple service at age three. This was not unheard of, as temple virgins served until ‘of age’ for marriage. Dedicating children to the temple dates far back in salvation history even to the prophet Samuel, whose mother Hannah promised to give him back to God in thanksgiving (Sam 1:1-28). In fact, the name Samuʹel means ‘God has heard’ or ‘asked of God’.

Already in her short life, Mary (like Zechariah in his long life) had spent her years in service of God.

Like Zechariah, Joseph had to marry within his own tribe too. Joseph’s tribe was of the house of David from which the Messiah was to come. Mary being betrothed to him confirms her lineage of David (v. 27).

Heart check:  I may be a cradle Catholic raised in the faith, or a new convert just discovering this treasure house of God. How has my faith journey, including any years without faith, prepared me for this present moment, the ‘here and now’?

Heart check:  what is the difference between consideration and fear? What is my default? What do I want my default to be?

Gabriel lays it all out for Mary, and WOW! She’s going to have a baby and He is going to be the promised one! She knew her faith and understood all that this meant, this ‘Son of the Most High’. But on top of that, God was asking her into some strange covenant, relationship, action she couldn’t quite grasp. It would not be a normal conception since she had been with no men (v. 34). Yet man (including women and children) couldn’t bear to be in the Glory of God without crumbling; how could this be done to her?

YOUR Son will be great, seated on the throne of David, reign over Israel until the end of all time, unceasing, unending. The Spirit, the same Spirit that rolled over the waters silently at the beginning of creation, will overshadow you as well in His creating way.

Heart check: Meditate on Zechariah and Elizabeth’s reaction to the Angel. Reflect upon the wounds from life that might be coming between you and God, keeping Him at arm’s length. Now God is telling you of this beautiful savior He is sending for you. And through His scripture, He also is giving you a peek into the beauty of the heart of the Savior’s mother—your new mother. Are you ready to let that same Spirit’s creative love take action within your heart? If not, what do you need from God to prepare you for this?

God’s words are meant for you. You also have found favor with God (v. 30). He reigns over you unceasingly and you will forever be in His care, in this special Kingdom without end (v. 33) simply because you are special to Him. Rest in that.

For a child is born to us, a son is given us, upon His shoulders dominion rests.

His dominion is vast and forever peaceful.

Available in paperback and Kindle e-book